What to do on our island, a guide for the uninitiated

A little paradise is waiting for you…

Kimolos or Arzantiera (which means silver due to the grey rocks) or Ehinousa (island of sea urchins) is a small volcanic island in the southwestern part of Cyclades with just 37,5 km2 acreage, among Sifnos, Milos and Poliegos (the biggest uninhabited island of the Mediterranean Sea).

A part of Kimolos and Poliegos is included in the regions of special nature beautifulness and endemic biodiversity of the Network of Protected Regions (NATURA 2000).

Psathi is the port of the island (Milos) and the capital is called “Horio” (and not “Hora” like in the other islands).

Taste the local treats and the products of Kimolos and find out the philosophy of the island.

For those who love Greek cuisine, there are a lot of choices that can satisfy every gastronomic demand in the taverns, while traditional coffee shops, patisseries and modern coffee shops and bars are waiting to offer you some moments of relaxation and fun. 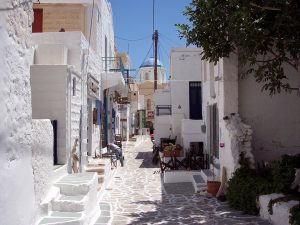 It is known for the characteristic island architecture with the white houses, the cobbled alleys, the churches and the amazing view of the endless blue colour of Aegean Sea.

If you are in Horio, you can visit the Medieval Castle, the Archaeological Museum, the Museum of Folklore and the post-Byzantine churches.

In Xaplovouni you can see the windmills and adore the panoramic view.

In the south entrance of the town, visit the picturesque fishermen settlement of Goupa with the “Sirmata”, the caves that are hewed in the soft rock where boats are protected. 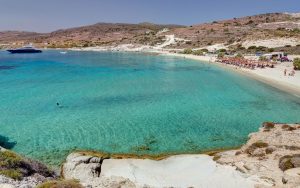 Prassa, where “Prassa House” is located, is a settlement in the homonym beach with the fantastic, white, rude sand and the blue waters. In the entrance of the settlement, you will find the therapeutic springs of the island and the caves of the Mediterranean species of seal “monachus-monachus”.

In the western side of the island in the location “Ellinika” there is the ancient sunk town. If you dive in you will be able to see the debris from houses and tombs of the ancient town. According to the archaeological founds, Kimolos is constantly inhabited at least from the post-Neolithic Age till today.

One of the rarest monuments that is included in the Map of the Geological Monuments of the Aegean Sea is a mushroom made of rock in the northwestern part of the island. Skiadi is consisted of a variety of rocks and owes its existence in these rocks and the strong winds blow in the area.

The natural beautifulness of Kimolos attracts those who love trekking, as well. Ancient paths and cobbled streets are waiting visitors to lead them to the secret locations and ancient areas of the island. These paths will lead you at lonely beaches, deserted mountaintops and hidden canyons.

Kimolos has a coastline of 45km with accessible beaches (some big and some smaller), unwind inlets and capes.

Sandy beaches with small pebbles or rocks, with transparent light blue waters, organized beaches or not, continuous, clear and unwind beaches will satisfy even the most demanding visitors.

If you have a vessel, you definitely have to visit the cave of Gerakia, the thermal spring at Agioklima, Therma, Mersinia, Zefokalamo, the cave at Kakopotamos and T’apsila of Geronikolas.

For your transfer you can use the bus of the island, taxi or to rent bike, motorcycle or car. Moreover, if you like, you can rent a vessel, so as to explore the island by sea. There is a gas station at Agios Nikolaos – Klima region.

The island has only a few lodgings in general. So, it would be better to book one on time instead of face any sad surprise. Book Now!

Transfer – How to come

From Piraeus: Port of Kimolos, Psathi, is connected directly with Piraeus about 5 times per week in summer months, with simple boats and speedboats.

From Milos: Otherwise, someone can go to Adamantas, Milos, catch the bus or take a car, drive till Apollonia (Pollonia) and then pass the opposite side by the ferry. The ferry, Panagia Faneromeni as it is named, has 5-6 routes per day.

From other islands: The island is connected by ship with other nearby islands, as well.

From Milos by airplane: Kimolos is supported by the airport of Milos.

You can find more information about the island on the Municipality of Kimolos Official Website.

This website uses cookies to improve your experience while you navigate through the website. Out of these, the cookies that are categorized as necessary are stored on your browser as they are essential for the working of basic functionalities of the website. We also use third-party cookies that help us analyze and understand how you use this website. These cookies will be stored in your browser only with your consent. You also have the option to opt-out of these cookies. But opting out of some of these cookies may affect your browsing experience.
Necessary Always Enabled
Necessary cookies are absolutely essential for the website to function properly. This category only includes cookies that ensures basic functionalities and security features of the website. These cookies do not store any personal information.
Functional
Functional cookies help to perform certain functionalities like sharing the content of the website on social media platforms, collect feedbacks, and other third-party features.
Performance
Performance cookies are used to understand and analyze the key performance indexes of the website which helps in delivering a better user experience for the visitors.
Analytics
Analytical cookies are used to understand how visitors interact with the website. These cookies help provide information on metrics the number of visitors, bounce rate, traffic source, etc.
Advertisement
Advertisement cookies are used to provide visitors with relevant ads and marketing campaigns. These cookies track visitors across websites and collect information to provide customized ads.
Others
Other uncategorized cookies are those that are being analyzed and have not been classified into a category as yet.
SAVE & ACCEPT
Powered by